Boulder-based Z2 Entertainment is Colorado's largest independent live music promotion and entertainment company, which formed in 2010 with the merger of two of Boulder's iconic venues, the Fox Theatre and Boulder Theater. Z2 operates and books talent in-house for these venues.

In 2015, Z2 grew to become the exclusive promoter for Chautauqua Auditorium’s summer concert series, a 1300-seat seasonal venue in Boulder. Z2 was the exclusive promoter of The Mishawaka Auditorium, a 1000-cap seasonal venue outside of Fort Collins for 6 years. In 2019, Z2 Entertainment formed Fort Collins Entertainment and purchased The Aggie Theatre, a 650-cap venue in downtown Fort Collins. We continue to expand booking venues around Colorado including the Breckenridge Riverwalk and Strings Music Pavilion in Steamboat Springs. Booking more than 600 events each year, Z2 Entertainment's mission is to showcase world-class talent in exceptional venues for the communities we serve.

The Boulder Theater, as it stands today, had its opening night on January 9, 1936. Its façade, finished in the art deco style of the day, is designated as a Colorado Historic Landmark. An all-around entertainment venue, the Boulder Theater hosts live music of all genres, comedy, film screenings, tech conferences, and much more.

Located on “The Hill”, the Fox Theatre is the premier live music club in Boulder, Colorado. Once voted by Rolling Stone Magazine as one of the nation’s best venues, the Fox offers top-notch talent, a world-class sound system, and an intimate 625 capacity atmosphere. 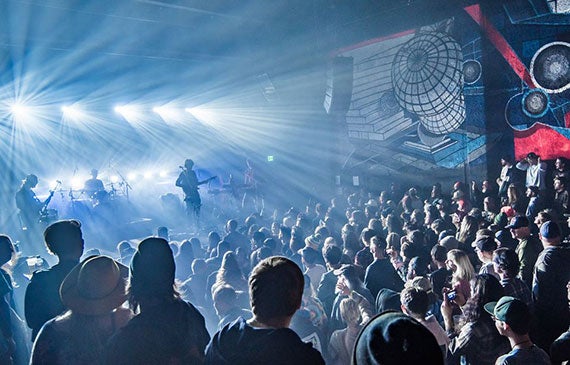 The Boulder Theater stage is 42’ wide. 18’ is behind the main traveling drape. The thrust is 8’ deep. It is 16’ from the deck to electrics.

The Boulder Theater allows you to sell your merchandise in our lobby. We split the revenue on a standard 80%/20% split. If you need a person to sell for you, we can provide one, provided we are notified 15 days prior to your event. There is a fee for this service, please advance.