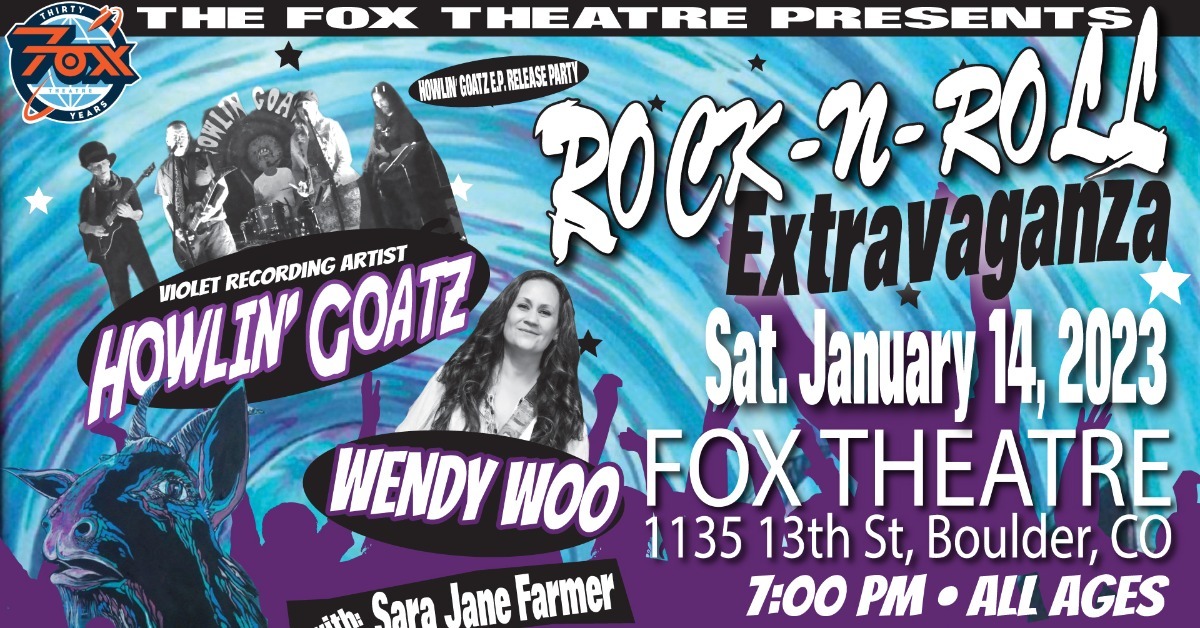 Howlin’ Goatz was born in a barn in the small town of Lyons, Colorado, 7 years ago. Inspired Johnny Conrad pulled together musicians from the Boulder Music Scene to create a high-energy Rock N’ Roll dance experience.

Get ready for Howlin’ Goatz to release their new 3 song EP in the near future with special guest appearance by Bill McKay on Hammond B3.

Wendy Woo has led anything but a “normal” life, which separates her from the average performer. As the daughter of bohemian parents who were founding faculty members at Naropa University in Boulder Colorado, her childhood home was a truly eclectic social center. Influential Beat writers such as Allen Ginsberg, William S. Burroughs, and Ken Kesey would be regulars in the living room!

This unusual setting helped develop Wendy into an emotive singer as a child. She started playing the guitar just so she could provide her own accompaniment. After mastering the guitar, she began writing songs and performing in songwriting circles. She attended both the University of New Mexico and the University of Colorado, where she studied a variety of musical genres, theory and composition. Her many musical influences include everyone from folk chanteuse Suzanne Vega to the legendary Paul Simon. The trademark blended rhythms in Simon’s music inspired her to add similar complexity to her own compositions.

With this in mind, Wendy developed a technique she calls “Slaptap,” a method of creating a captivating visual and percussive backdrop using the guitar body and fret board.

Her innovative spirit led her to the storied steps of Boulder’s Fox Theatre for her first job in the music industry. There she gained confidence as a performer, while learning the skills of self-promotion, booking and publishing. The venue acknowledged her talent by slotting Wendy to open for world renowned headliners, including Counting Crows, Michael Franti and others.

Wendy’s dedication and competence was rewarded when she won the Colorado Lilith Fair Talent Search in 1999, sharing the stage with an elite lineup including the Indigo Girls, Shawn Colvin and Sheryl Crow.

Her versatility is evident by the wide variety of artists whom Wendy has since shared the stage, including The Fray, Sarah McLachlan, Indigo Girls, James Taylor, Counting Crows, Brad Paisley, Karla Bonoff and Big Head Todd and the Monsters. Her tour stops have included performances at premier venues like Red Rocks (CO), the Living Room and Bitter End (NYC), Hotel Café (LA), Bluebird Café (Nashville) and Eddie’s Attic (Decatur, GA).

Having penned and recorded over 200 original songs and playing over 150 dates yearly, she has gained a reputation as one of the most versatile performers on the circuit. An example of that reputation is the legendary Carly Simon inviting Wendy to perform with her at “Festival of the Senses” on Martha’s Vineyard in 2014.

Wendy has also been named Westword Magazine’s Music Awards “Singer/Songwriter of the year” five separate times, resulting in her induction into Westword’s Hall of Fame.

The 2015 release of “Tipping Point”, which was produced by Grammy Award winner Jim Gaines (Stevie Ray Vaughn, Carlos Santana, Huey Lewis and the News) and mastered by Grammy winner Brad Blackburn (Maroon 5, Alison Krauss & Union Station, Black Eyed Peas and Sara Bareilles.), is a testament to her mastery as a tunesmith and a reaffirmation that Wendy Woo continues to live a life that defies the term “normal!”